Often the word observatory conjures the imagination to expect a place where astronomers look at the stars and planets. When first time guests visit the Martz/Kohl observatory they find a broad spectrum of unexpected aspects and frequently a question arises asking what we do at the observatory when all that was expected was to look through a telescope.

The observatory’s mission is to inform, educate and inspire the general public and support teaching in the sciences of astronomy and physics. The avenues of approach to its mission are surprisingly diverse. The voluntary observatory staff has the experience and means to open the door of wonderment to whomever crosses its threshold. The complexity of the observatory’s offerings and the science that takes place at the observatory comes as a total surprise to many.

Aside from open houses, guest speaker programs, providing tours, video presentations, offering hospitality to walk-ins, conducting scheduled programs to many organizations, providing observing sessions under the stars and occasional off site outreach programs, the observatory has been engaged to expand its itinerary to include an introduction of astroimaging to students. In addition to its normal activities, it may come as a surprise, many hours have been engaged in scientific investigations and most recently the observatory has begun to share its findings with the scientific community.

Our images of comet 67P/Churymov-Gerasimenko and related data is now an official part of the data the European Space Agency/ NASA cooperative will be using. We uploaded 69 image files and 4 data lists to them. This data along with 160 other observers/ observatories will be used in conjunction with the Rosetta spacecrafts to increase our knowledge of the cometary environment and how we on earth see it.

Often our members are asked if the observatory does science. The answer is yes and the following demonstrates this fact. Recently asteroid 1177 Gonnessia was tracked and the findings were forwarded to Brad Timerson, Head Coordinator of the IOTA Asteroidal Occultation Program, North America.

As reported by Tom Traub, the Martz/Kohl observatory’s background information in combination with other observatories was used to make occultation observations. As shown, the asteroid is an oblate spheroid with its major axis tilted 41.9 degrees at the time of observations.

Details of scientific interest about asteroid 1177 Gonnessia was discovered on November 24th 1930 by L. Boyer at Algiers include the following information. Its orbit was determined to be 6.13 years with an inclination of 15 degrees and a rotational period of 30.51 hours. The visual magnitude at the time of observation was 14.77. The distance from Earth at observation was 243,071,813 miles. The asteroid’s distance from the Sun was 318,373,639 miles at that time. Its location was RA 23h 57m 23s. Its declination was 20d 47m 43s. The new size of the spheroid is determined to be 105 km x 93 km versus the old measurement of 93 km spherical.

This information will probably have little meaning to a majority of our readers and is only presented as an example to verify the observatory has embarked on contributing useful information to the scientific community in its quest to do science. 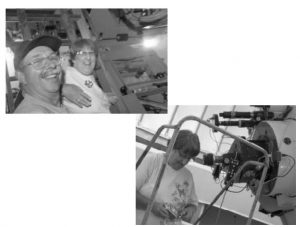 25 years ago on the same ladder I proposed to my wife, Melody while she was 12 feet off the ground looking through the eyepiece of the Martz 30″ telescope looking at the Moon. I would not let her down till she gave me an answer and it was YES! The first person we saw to tell them was Mary Martz. Well now it’s 25 years later and tonight, July 28th after a nice dinner at Millers Grove we went to the Martz/Kohl Observatory and while she was looking at Mars through the Kohl 20″ telescope, only this time a little closer to the ground I asked her again for another 25years and the answer was YES! and she got a little bauble for the occasion. Where has all the time gone to? We are both so blessed to have each other and such a wonderful family and friends! God is good and has blessed us abundantly. So my love is my universe and it is awesome and I look forward to sharing it with my wonderful woman.

Informing, educating and inspiring the general public and supporting teaching in the sciences of astronomy and physics.

The Martz-Kohl Observatory is run by the Marshal Martz Memorial Astronomical Association, a not-for-profit voluntary group of people interested in astronomy. The observatory is located in Frewsburg, New York in Chautauqua County, not far from Jamestown and Chautauqua Lake.

Use PayPal today to make your tax deductible Donation!